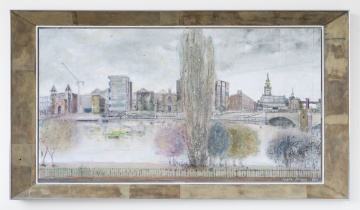 November 21, 2020 - January 23, 2021
Sikkema Jenkins & Co. is pleased to present River, a solo exhibition of new paintings by Merlin James, on view November 21, 2020 through January 23, 2021. Central to James’ recent work is the artist’s daily, nuanced awareness of the view from his home in Glasgow, looking out to the River Clyde and surrounding environments. These paintings constitute a “familiar remembered image, a cumulative memory,” incorporating all the “inaccuracies or approximations” of his own recollection. Works like Dredge or The Window present very much a specific location, yet a sense of the artificial and the universal is carried through the imaginative scale and coloration. Painting neither directly from life nor from photographs, James draws on impressions and recollections over time to bring to life familiar spaces and the presences that populate them. The physicality of painting remains a central focus. The raw material of canvas is frequently as integral to the complete work as the paint applied upon it. In some paintings James has made incisions to reveal the stretcher bars or contribute to imagery, while other works have semi-transparent surfaces, veiling information beneath. The stretcher (always fashioned by the artist himself) can become a visual, even sculptural feature. Idiosyncratic picture frames are also a frequent feature. While acknowledging poetry and music as touchstones, James insists upon the medium of painting, and the range of genres inherent to it, as a distinct field of art production. Within his visual morphology, abstract shapes transform into landscape motifs, landscape and figure elements combine with still life objects. In these latest works, such complexities of form and convention articulate some of the artist’s most candid statements to date. Writing of French painter Jean Siméon Chardin, he notes: "Personal human narrative is in no way eclipsed by the formal and depictive work and play going on in the painting. It is continuous with them. Pictorial ambiguity and complexity prevents us from seeing the painting merely as a biographical document but, despite or because of that, permits us to entertain as full a human narrative as the picture will sustain." Born in Cardiff, Wales, in 1960, Merlin James studied in London at the Central School of Art and the Royal College of Art. He currently lives and works in Glasgow, Scotland. James’ work has been exhibited widely, including in recent solo shows at A-M-G5, Glasgow, UK (2018); OCT Boxes Museum, Shunde & OCT Art and Design Gallery, Shenzhen (2018); Long Game, CCA Glasgow (2016); Kunstverein Freiburg (2014); Parasol Unit, London; KW Institute for Contemporary Art, Berlin (2013). In 2007 James represented Wales at the 52nd Venice Biennale. He also curates the exhibition space 42 Carlton Place, in Glasgow.
Past Exhibitions 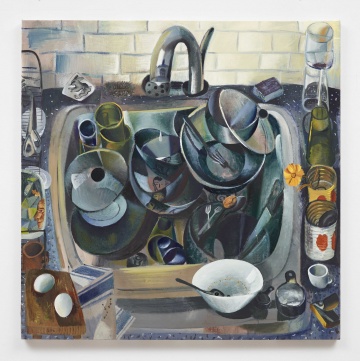 530 West 22nd Street
New York, NY 10011
October 9, 2020 - November 14, 2020
Appointment required. Book online on gallery website. Sikkema Jenkins & Co. is pleased to present Morning, a solo exhibition of new work by Louis Fratino, on view October 9 through November 14. This will be Fratino’s second solo show with the gallery. Louis Fratino makes paintings and drawings from specific memory and art historical references. Fratino synthesizes visual languages sampled from antiquity to modernism to describe the contemporary body, landscape, and interior spaces. New paintings of still lifes and interiors explore the tonal and emotionally evocative qualities of morning light, and the quotidian routines associated with that time of day. Searching for a sense of queerness in the gestures of everyday life, Fratino considers the nuanced interactions of light with form, space, and surface as potential realms for discovery. Influenced by the writings of Italian poet Sandro Penna and works by artists Filippo de Pisis and Marsden Hartley, Fratino looks for an essential queerness that lies parallel to the body, extending outward into a more complete world. Born in 1993, in Annapolis, MD, Louis Fratino received his BFA in Painting with concentration in Illustration from the Maryland Institute College of Art, Baltimore, MD in 2015. He is a recipient of a Fulbright Research Fellowship in Painting, Berlin (2015-16) and a Yale Norfolk Painting Fellowship, Norfolk, CT in 2014. Fratino lives and works in Brooklyn, NY. The artist's first institutional solo exhibition, curated by Jared Ledesma, will open at the Des Moines Art Center in November 2021. 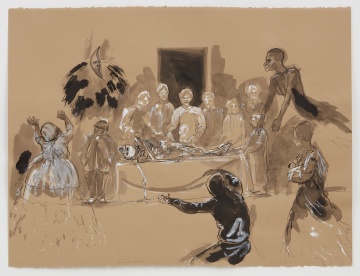 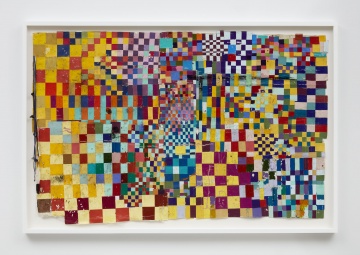 on the lower frequencies I speak 4U (alquimia sagrada)

530 West 22nd Street
New York, NY 10011
January 23, 2020 - February 29, 2020
Information has been encoded in patterns and lines throughout human history, whether in print media, through video, or on a weaving loom. —Wesley Miller (in response to video artist Beryl Korot) Some groups carry the sum of groups which in turn carry the sum of other groups. —Herbert R. Harvey and Barbara J. Williams (Native American Mathematics, 1986) ¿Quién sabe sino que, en las frecuencias más bajas, hablo por ti? —Ralph Ellison, (El hombre invisible, 1952) Sikkema Jenkins & Co. is pleased to present on the lower frequencies I speak 4U (alquimia sagrada), a solo exhibition of work by william cordova on view January 23 through February 29, 2020. For the artist’s fourth solo exhibition at the gallery, cordova has developed a multi-media installation seeking to explore “the juxtaposition of past structures to more contemporary structures that illuminate the ephemeral nature of our existence, as beings who create material culture as a means of documentation and memory.” [1 Monique Moss (Choreographer/Artistic Director Third Eye Theater)] The exhibition incorporates large-scale drawing collages, photography, and sculpture into an environment that reflects on abstract forms rooted in sacred geometries, while also drawing from historical moments and monuments of resistance. Two large scale sculptures, untitled (RMLZ), and untitled (palenque), reference both Brutalist and pre-Columbian architecture, specifically the temple-Citadel sites at Sacsayhuaman and Ollantaytambo. Incorporating the architectural motifs found at these sites, such as zigzags and grids, cordova’s sculptures thread an ephemeral repository, meditating on the concepts of image encoding from biological, natural, galactic, and cultural sources. The sculptures disrupt the formal structure of the gallery, creating alternative perceptions of space and time. “Data is only meaningful when viewed within the context of its logical structure.” —Marcia Ascher (Mathematical Idea of the Incas, 1986) In his series rumi maki, william cordova takes on an ethnographic approach in addressing shared symbolism found in textile data encoding and architectural design. Named after the ancient Andean martial arts, rumi maki consists of multi-colored collages on paper, constructed from vivid layers of recycled paint chips. The arrangement of colors and patterns carry latent meanings, dependent on geography, culture, and the readings of celestial bodies. As cosmological maps, the collages synthesize the sacred geometries of architecture with the visual narratives of historical civilizations. Its form also recalls pioneering early video installation artist Beryl Korot, and her contributions to the 1970s video journal Radical Software. ogun (el siglo de silencio) sees the artist return to large-scale collage on paper after several years focused on site-specific installations and smaller-scaled work. This work introduces viewers to a new series titled el quinto suyo (the fifth suyo), collages culled from reclaimed paint chip samples and recycled cardboard pigmented with old discarded oil stick paint. Literary references permeate cordova’s collages; texts such as El Siglo de Las Luces by Alejo Carpentier, El Monte by Lydia Cabrera and Decimas by Nicomedes Santa Cruz point to his ongoing interest in the distribution of power, spirituality, and labyrinths of perception. The exhibition also features the artist’s first published edition, consisting of prints, audio and sculptures, commissioned by the LeRoy Neiman Center for Print Studies at Columbia University. The title quotes the final phrase in Ralph Ellison’s 1952 novel, Invisible Man, as the protagonist prepares to return to society following a transformative period. Inspired by cordova’s own return to Harlem in 2019, the edition highlights interconnected systems of spiritual and cultural exchange that transpired between Harlem and Latin America throughout the twentieth century. William Cordova was born in Lima, Peru in 1969 and moved to Miami, Florida at an early age. He graduated with a BFA from The School of the Art Institute of Chicago in 1996 and went on to earn an MFA from Yale University in 2004. He has participated in numerous artist residencies including Artpace, San Antonio, TX; The Core program, Museum of Fine Arts, Houston, TX; The Headlands Center for the Arts, Sausalito, CA; The Studio Museum in Harlem, NY; Skowhegan School of Painting and Sculpture, Skowhegan, Maine; and American Academy in Berlin, Germany. Cordova’s first major survey exhibition, now’s the time: narratives of southern alchemy, was presented at the Perez Art Museum; Miami, FL in 2018. Group shows include Pacha, Llaqta, Wasichay, Whitney Museum of American Art, New York, NY; 13th Havana Biennial, Cuba; and In Plain Sight at Henry Art Gallery, University of Washington, Seattle, WA (2019). Forthcoming exhibitions include individual exhibitions at Galerie Florian Schonfelder. Berlin, Germany, and Livia Benavides 80M2, Lima, Peru (2020). His work is included in the collections of the Whitney Museum of American Art, New York, NY; Solomon R. Guggenheim Museum, New York, NY; Harvard University, Cambridge, MA; Yale University, New Haven, CT; Museo de Arte de Lima, Peru; Ellipse Foundation, Cascais, Portugal; Museum of Contemporary Art, Perez Art Museum, Miami, FL; NSU Museum, Fort Lauderdale, FL; and La Casa de las Americas, Havana, Cuba, among others. 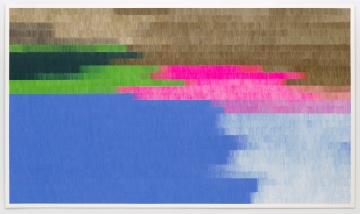 As the Ground Turns Solid

530 West 22nd Street
New York, NY 10011
November 21, 2019 - January 18, 2020
Sikkema Jenkins & Co. is pleased to present As the Ground Turns Solid, a solo exhibition of new work by Zipora Fried on view November 21, 2019 through January 18, 2020. This will be Fried’s inaugural solo exhibition at the gallery. Working across sculpture, photography, and drawing, Fried’s oeuvre explores the potential of color and form to transcend language and express the nuances of the human experience. The subconscious remains a focal point of interest for Fried, as the formal conditions of object and image become deconstructed and reinterpreted through their symbolic connections to one another. Every gesture of the artist’s hand, in shape and form, signifies a distinct moment in the phenomenological experience of Fried’s work. The new works featured in this exhibition are the result of Fried’s lengthy stay on Lamu Island, in the Lamu Archipelago of Kenya. Founded in the fourteenth century, Lamu is the most preserved Swahili settlement in East Africa. Fried’s series of drawings synthesizes the multi-textural conditions of human and natural life, as experienced during her residency on the island. Fried’s series of pencil drawings drew inspiration from the vivid flora and fauna of Lamu Island. Hues of blue, green and gold meld into one another, recalling the artist’s own visions of Lamu Island, of “sky and mud colored lizards, soft-toned cicada shells, sunsets echoing exploding worlds […] the yearning breath of the tide syncopating melodically with the infinite characteristics of the sand.” Composed of meticulously patterned lines, the act of drawing each individual stroke mediates a delicate balance between the composure of ritual and the inconsistency in reiteration. Each mark thus becomes subsumed within a larger color field, as the rational functionality of line and form are deconstructed and transformed into a unique sensorial experience. Zipora Fried (b. Haifa, Israel) studied at the Academy of Applied Arts, Vienna. Recent exhibitions include Late October at On Stellar Rays, New York (2016); Zipora Fried at Marfa Contemporary, Marfa, TX (2015); and Good Night, Mister Procustes at Galerie Steinek, Vienna (2014). Her work is included in public collections of The Whitney Museum of American Art, New York, NY; Albright-Knox Gallery, Buffalo, NY; The Albertina Museum, Vienna, Austria; and the Harvard Art Museums, Cambridge, MA. She currently lives and works in New York.

Come Softly to Me

In a Few Words

In A Lighter Place

I Am A Rainbow Too

The Enormity of Time