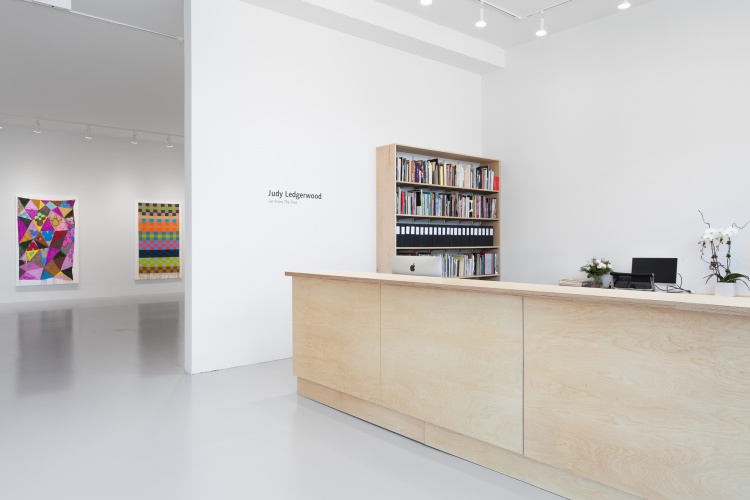 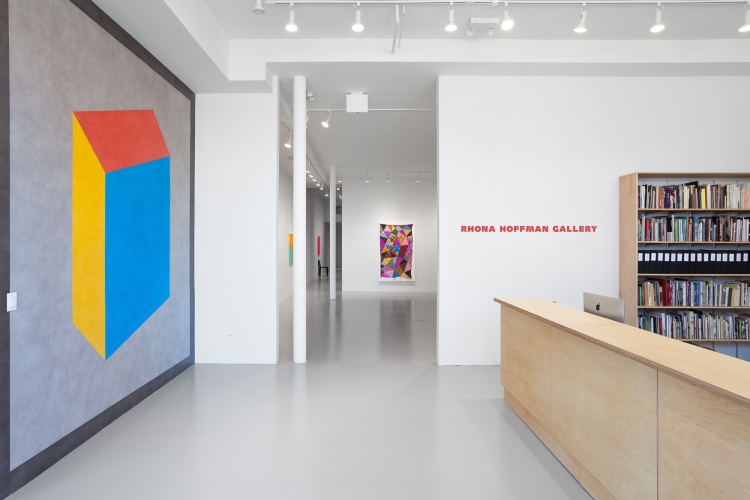 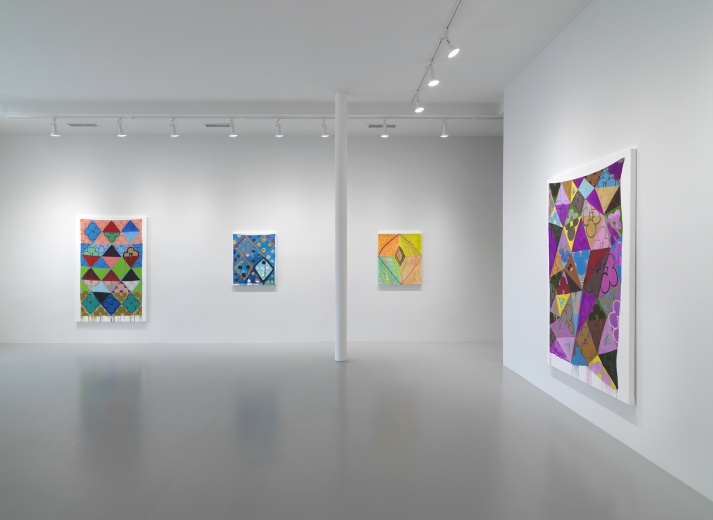 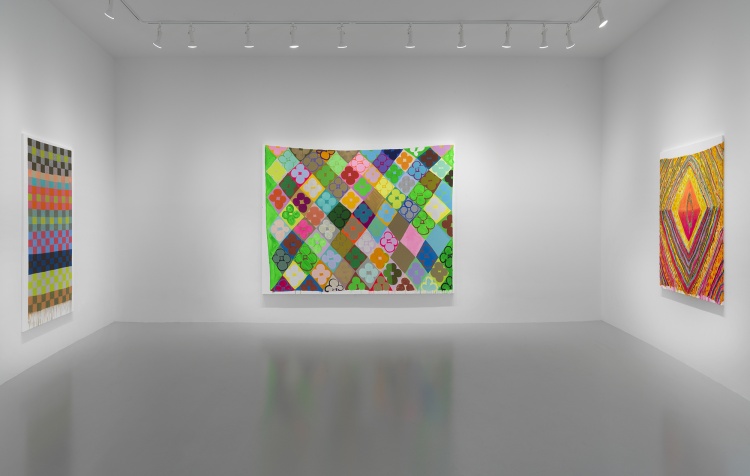 If We Asked about the Sky

1711 West Chicago Avenue
Chicago, IL 60622
July 10, 2020 - August 15, 2020
Rhona Hoffman is honored to present “If We Asked about the Sky”, the gallery’s fifth solo exhibition with Chicago-based artist Anne Wilson. Oscillating between the macro- and microcosmic, Wilson’s new textile-based works set the immediacy of human labor and encounter against the infinitude of space and time. In a moment of unprecedented global transformation, the exhibition offers an opportunity to “meditate on living in and through loss,” as the artist describes. The exhibition is anchored by Wilson’s suite of 21 Material Drawings (2018-20). Each work begins with the chance operation of throwing ink onto a fragment of white damask cloth; through capillary action, the ink absorbs into the fibers of the cloth, expanding outward to form circular shapes with irregular fractal-like edges. Wilson then develops the results of her immediate gestures with a deliberate, slow stitch of hand embroidery with silk thread and hair. The image associations shift between everyday phenomena—a pin prick, a spill, or a splatter—and a celestial idiom, evoking planets, craters, and galaxy clusters. “The work proposes both smallness and vastness,” Wilson says, “and inhabits a space of contemplation between the mortal world and a celestial universe that is infinite and unknowable.” Also on view is Absorb/Reflect (2020), a floor installation of embroidered gold roundels and mourning garlands made from black ribbon. The golden forms face upward and evoke the light and constancy of the sun, while the black garlands are meant as objects of meditation on loss, offering a way to remember, transferring the care of a maker to another person. Wilson first began to make the mourning garlands in the late 1980s for friends who had lost loved ones during the AIDs epidemic. A portion of the sales proceeds from the garlands will be donated to Doctors Without Borders. The exhibition takes its title from a work that is installed on the far wall of the gallery entrance—a large, tapestry-like damask tablecloth transformed into a sprawling map of blue ink and embroidered hair. “If We Asked about the Sky,” it asks us, what could we learn about our experiences on earth? 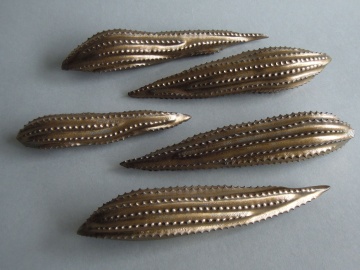 falling up: becoming from undoing

1711 West Chicago Avenue
Chicago, IL 60622
July 10, 2020 - August 15, 2020
Rhona Hoffman Gallery is delighted to present our seventh solo exhibition with Chicago-based artist Chris Garofalo. For the past three decades, Garofalo has developed her signature form of ceramic sculptures inspired by the flora and fauna of the world’s ever-changing and increasingly precarious ecosystems, from the rainforest to the desert to the depths of the ocean. Garofalo fires multiple layers of glaze on her handworked clay forms, rendering lifelike skins, shells, and membranes that appear to have grown organically. Her specimens recall real-life organisms, but all of the sculptures are born of Garofalo’s imagination, playing with and transcending standard scientific classification. Animated by theories of evolution and metamorphosis, the works seem almost to breathe, grow, mutate, and respond to their environments. For “falling up” Garofalo has crafted an extraordinarily delicate installation of ceramic forms that hang from the ceiling and walls of the gallery, in what the artist considers its own ecosystem. The fragility and contingency of the works invoke the natural environment that inspired it, serving to remind us that humans present both an existential threat to our planet’s biodiversity as well as the greatest hope for its preservation. “Whether blossom or human being, life is fragile and temporary,” Garofalo writes. “‘falling up” invites us to undo conventional notions of human primacy and separation from nature, to embrace the profound porosity between categories of living beings, becoming more empathetic members of the entire biological community.” 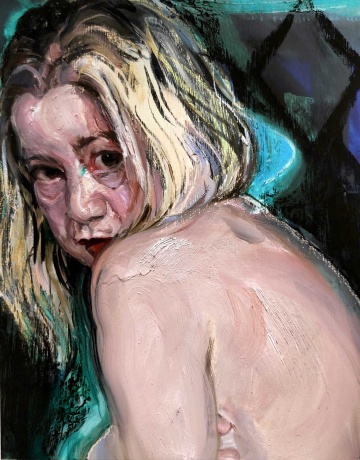 1711 West Chicago Avenue
Chicago, IL 60622
February 21, 2020 - March 28, 2020
Rhona Hoffman Gallery is pleased to announce Soil, Seed, and Rain, an exhibition of new work by Chicago-born, Brooklyn-based artist Nathaniel Mary Quinn. This is his third exhibition with the gallery. New paintings and works on paper continue Quinn’s exploration of the human form, testing the boundaries between abstraction and figuration, memory and perception. Rendered in the artist’s signature mode—what he calls “expressionistic cubism”—the deconstructed portraits give subjective form to the connections between Quinn and people in his life, from loved ones and neighbors to more recent acquaintances. Privileging emotional honesty over literal representation, these latest works result from a more intuitive process than Quinn’s earlier portraiture. He builds each composition in response to a few initial strokes of paint laid down on the painting’s surface, allowing this unmediated energy to guide the image. “Those initial strokes are the most fervent, most honest, most genuine,” he says. “Those are the strokes that are far less likely to be controlled or conditioned." The exhibition’s title, Soil, Seed, and Rain, speaks to Quinn's interest in a more elemental, pared-down approach to human connection and form—one drawn from the literal stuff of life. 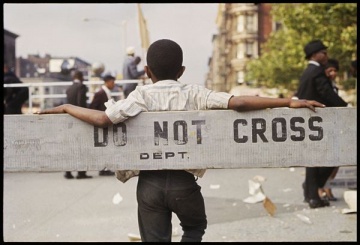 This Land Is Your Land

1711 West Chicago Avenue
Chicago, IL 60622
January 10, 2020 - February 15, 2020
“...I feel it’s the heart, not the eye, that should determine the content of the photograph. What the eye sees is its own. What the heart can perceive is a very different matter.” —Gordon Parks Rhona Hoffman Gallery is thrilled to present an exhibition of photographs by Gordon Parks, one of the greatest documentarians of 20th-century American and African American life. Focusing particularly on Parks’ images of African American youth, the exhibition This Land Is Your Land includes works from the 1940s to the 1960s, many of which are being shown for the first time. Children were a subject Parks captured throughout his career. Photographing them allowed Parks to expose contemporary issues of racial, social, and economic inequality, while also often presenting the possibility of a hopeful future. Included in the exhibition is the iconic image Doll Test, Harlem, New York (1947), which documents the infamous psychological experiment that tested the effects of segregation on black children, as well as selections from Parks’ 1956 Life Magazine photo essay “A Segregation Story.” Meanwhile, in the more ambiguous Untitled, Harlem, New York (1963), a young boy stands astride a police barrier—the setting left undetermined to the viewer—exuding a casual self-possession that can only come with youth. Together, the works in This Land Is Your Land attest to the singular vision of one of America’s most important photographers, artists, and advocates for social justice. One of the seminal figures of twentieth century photography, Gordon Parks left behind a body of work that documents many of the most important aspects of American culture from the early 1940s up until his death in 2006, with a focus on race relations, poverty, civil rights, and urban life. Born into poverty and segregation in Kansas in 1912, Parks taught himself photography after buying a camera at a pawnshop. He found employment with the Farm Security Administration (F.S.A.) in the 1940s, which was then chronicling the nation’s social conditions, before his employment at Life magazine (1948-1972). He has received countless awards, including the National Medal of Art, and his work has been the subject of numerous exhibitions, including the National Gallery of Art, Washington, D.C., The Museum of Modern Art, New York, and The Art Institute of Chicago

The Dance of Atoms

The Ins and Outs: Figures in the Urban Landscape

The Invisible Enemy Should Not Exist (Room Z, Northwest Palace of Nimrud)

Far From The Tree