Since 1980, Robert and Cynthia Cage McClain have focused on the exhibition and the acquisition of museum quality modern and contemporary American and European art.

In addition to promoting the work of our stable of artists, our strength is guiding and educating both the new, as well as the seasoned, collector. We actively advise and help private individuals and institutions in the acquisition and sale of artworks to organizing a comprehensive program of collecting. With over three decades of proven expertise, McClain Gallery has a strong reputation as secondary market specialists who offer, research and source artworks of exceptionally high quality with discretion. We regularly attend art fairs, bid at auction and draw on our existing strong relationships with dealers, museum professionals, and collectors around the globe to provide our clients with thorough, insightful and market savvy advice. 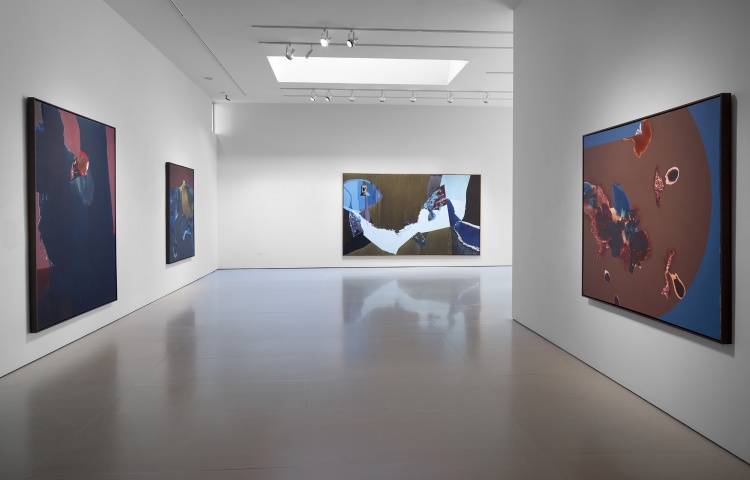 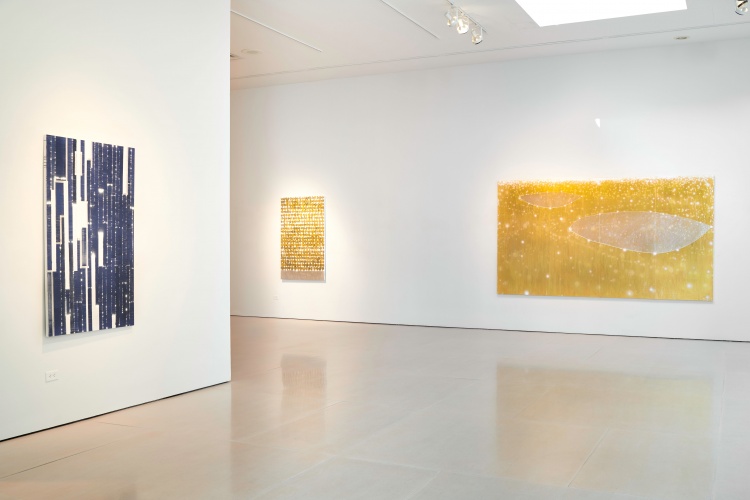 2242 Richmond Avenue
Houston, TX 77098
McClain Gallery is pleased to present an online exhibition of recent paintings by California-based artist Gary Lang (b.1950 in Los Angeles, California). Lang's Concentric Squares offer a muscular, contemplative rigidity, as a counterpoint to the poetic infinitude of his circle paintings. The assertive, rapid-paced execution of each four-cornered chamber possesses its own identity, actualized through color and texture. Each square's exalted center penetrates the observer's optical space, asking us to start from the inside and work our way out, both physically and metaphorically. In embracing a square format, these new paintings are inevitably in dialogue with such 20th-century icons as Josef Albers and Richard Anuskiewicz. Like Lang, both artists were concerned with color theory and interaction and the mechanics of vision and optical effects. Now, it seems, Lang has added a spiritual resonance to the legacy of square paintings.

Ping Zheng: Look Into the Future

2242 Richmond Avenue
Houston, TX 77098
McClain Gallery presents Look Into the Future, our first exhibition of Ping Zheng's (b.1989, Zhejiang, China) work. The exhibition will be taking place online, although the works are available for viewing by appointment. Zheng's oil stick on paper drawings are symbolic and lyrical landscapes, mysterious in their non-specificity. For Zheng, depicting nature brings joyous memories of feeling free in the outdoors. The bright colors are bolstered by the thick and deft application of layers of oil stick, which is sometimes scraped back in small areas to reveal colors previously applied. Her method is very physical and an extension of her energetic process - she creates a variety of rich textures: at times her vivid palette reads velvety soft, while other portions are scraped, ribbed, or striated. "My inspiration is grounded in childhood memories of natural landscapes, where I felt free as a human in the outdoors, avoiding family pressures as being a girl at home... Art is about how you view the world and I always want to be creative with my artwork and genuine with my paradoxical thoughts, which is about the past and present in my life. I like spending a lot of time on processing and communicating with my artwork. I think this is how the subconscious mind brings me a particular focus on creativity, approaching art as a mean of personal development. My passionate belief in equality, males and females are just part of this universe." - Ping Zheng Ping Zheng (b. 1989, Zhejiang, China, lives and works in Brooklyn, NY) received an MFA in Painting from the Rhode Island School of Design in 2016 and a BFA in painting from the University College of London, Slade School of Fine Art in 2014. Her works have been exhibited at Microscope Gallery, Brooklyn, Nancy Margolis Gallery, New York, the Chinese American Arts Council/Gallery 456, New York, and Trestle Gallery, Brooklyn, among other venues. She has completed artist residencies at the Rancho Linda Vista Arts Community in Oracle, Arizona and the Vermont Studio Center in Johnson, Vermont among others. She is represented in New York by Kristen Lorello.

2242 Richmond Avenue
Houston, TX 77098
McClain Gallery is pleased to present In the Studio, an exhibition of paintings, drawings, and prints by Kelli Vance (b.1983 Garland, TX). This selection of work from the past twelve years witnesses Vance's evolving narrative in producing images of women that range from intimate yet estranged, to ritualistic and meditative. Vance's photorealistic portraits often explore psychological spaces that investigate her anxieties, sensuality, and identity, and, increasingly, spirituality. Her process involves staging a scene, frequently using herself as the protagonist, then taking photographs that will become studies for the final work. Two small studies, both titled Honey, 2012 revisit a much larger portrait from 2009 where she poured honey at the crown of her head; here, with Minter-esque cropping, Vance captures the ooziness of the liquid now trickling past her nose and over her mouth. In her paintings, the operative tension between a seductive surface and an obscured narrative intentionally keeps the viewer at arm's length. Apropos of isolation, the sitters often seem worlds away. Our Inner World Is Close, But We Never Go There, 2017, also implies that they are sometimes disconnected from their psyche. But, equally omnipresent in their stillness is contemplation, which suggests fertile ground for both change and growth. Kelli Vance currently lives and works in Houston. She received her BFA from the University of North Texas and her MFA from the University of Houston in 2008. Vance was a finalist for the Hunting Art Prize in 2013 and completed the Roswell Artist Residency Program in Roswell, New Mexico in 2008. Recent exhibitions include solo shows at Cris Worley Gallery, Dallas in 2014 and 2020, the Texas Biennial Anniversary Show at Big Medium, Austin in 2013 and at Samuel Freeman Gallery, LA in 2011. This is her third solo show at McClain Gallery.

2242 Richmond Avenue
Houston, TX 77098
HAZARDS presents three prints from a suite of works by David Row (b.1949 Portland, Maine) printed at Two Palms Press in New York City. While McClain Gallery has previously exhibited his paintings, works on paper, and sculptures in cast glass, this online exhibition showcases Row's longstanding relationship with printmaking-which dates back to 1989. "This new body of work furthers Row’s long-standing interest in exploring the tensions framed by particular juxtapositions: body and mind; artist and viewer; fragments and wholes; meaning and ambiguity; stability and instability; structure and chance; objects and images. In these new silkscreens, rich, deep hues and crisp whites are contained within dynamic, irregular shapes and are contrasted by thin lines of bright color. The UV ink with which the silkscreens are printed allows the artist to build up color in a way that creates ample texture and gives the appearance that the surface has been torn or scraped, allowing color to come through from beneath. The energy and motion of the shapes are countered by an underlying geometric logic that is a constant in Row's work." –Two Palms Press Row has pursued his professional career as a painter living and working in New York City since graduating from Yale (MFA 1975, BA cum laude 1972). Throughout the 70s and 80s, Row was a prominent member of a new young generation of abstract painters, including Ross Bleckner, Christian Eckart, Peter Halley, and Mary Heilmann. In 1995, Row was included in the contemporary survey show, Critiques of Pure Abstraction, curated by Mark Rosenthal, which traveled widely to the Armand Hammer Museum of Art at UCLA, the Blaffer Gallery at the University of Houston, and three other institutions. In 2013, Row's work was seen in Conceptual Abstraction, curated by Pepe Karmel and Joachim Pissarro, a show that reprised an important 1991 exhi­bition of the same name at Sidney Janis Gallery. Row has lectured and taught at numerous institutions, including The Cooper Union, Rhode Island School of Design, Pratt Institute, Princeton University, Fordham University, and currently at the MFA Fine Arts Program at the School of Visual Arts in New York City. His works are in the permanent collections of museums worldwide including The Brooklyn Museum, The Carnegie Museum of Art, The Cleveland Museum of Art, and the Museum of Contemporary Art, San Diego. He has exhibited internationally including with Von Lintel Gallery in New York, with Brandstetter & Wyss, Zurich, Von Lintel and Nusser, Munich, Marella Arte, Milan, Thaddaeus Ropac, Salzburg and Paris and Andre Emmerich in New York. This is his third solo show at McClain Gallery.
Current Exhibitions

2242 Richmond Avenue
Houston, TX 77098
June 24, 2020 - August 29, 2020
McClain Gallery is pleased to present a focused look at collages by Dorothy Hood (b. 1918, Bryan, Texas d. 2000, Houston, Texas). The pictorial space and visual fissures of her large-scale paintings and works on paper recall a profound mindscape that echoes her early Surrealist connections from her time spent in Mexico in the 1940s-1960s. Having moved back to Houston in 1962, the impact of the space age and the fathoms of the cosmos influenced Hood’s paintings further. She would start making collages in 1982, and while lesser-known, these works are rich in material experimentation and reveal a more intimate look at the artist’s process and inspirations. By focusing on an edited group of collages, this exhibition provides a closer look at Hood’s unique artistic vision and expands the understanding of her practice as a whole.

2242 Richmond Avenue
Houston, TX 77098
June 3, 2020 - August 29, 2020
McClain Gallery is pleased to present an exhibition of drawings by the late artist Ted Stamm shown alongside paintings by contemporary Swiss pop artist Sylvie Fleury and sculptures by Vincent Szarek. This combination plays off these artists' sincere, yet conceptual approaches to object-making. The show emphasizes the objecthood of their work and source inspiration, while drawing attention to materiality, hand-labor, and surface
Past Exhibitions

Between the Needle and the Book

2242 Richmond Avenue
Houston, TX 77098
January 18, 2020 - March 7, 2020
McClain Gallery is pleased to present artist Elaine Reichek’s first solo exhibition with the gallery, Between the Needle and the Book. Occupying both of the gallery’s spaces, this two-part show introduces Reichek’s five-decade career like a pair of bookends, juxtaposing her most recent text-based embroideries with sewn paintings and fabric works from the 1970s. For Reichek, embroidering words onto fabric rejoins text to its etymological sibling, textile. In the early 1990s, Reichek began researching the history of the embroidered sampler and sewing new versions of traditional patterns. In her revisionist samplers, she strategically replaces the usual scriptural verse or wise maxim — which young girls learned to sew as part of their education — with alternative literary or historical quotes from a distinctly feminist perspective, whether critical or humorous. Over time, as Reichek appropriated from a wider variety of both textual and art historical sources, her embroideries have expanded beyond the formal bounds of the sampler, even as they continue to employ thread and fabric as fundamental materials.

2242 Richmond Avenue
Houston, TX 77098
October 12, 2019 - December 21, 2019
McClain Gallery is pleased to present a solo exhibition of paintings by the late artist Dorothy Hood. Best known for her large-scale paintings that bring together elements of Surrealism, Modernism, and Abstraction, Hood created works that drew on her fascination with outer space, the terrain of the southwest, poetry, and mysticism. Illuminated Earth will feature a series of paintings that depict both physical and metaphorical landscapes, emphasizing Hood’s deft use of color, geometric forms, and spatial depth. The paintings on view will speak both to the time Hood spent in Mexico and to her eventual return to exploring the Texas landscapes of her youth, highlighting the intrinsic connection in her work between abstraction, landscapes, the cosmos, and the psyche. This exhibition will also include seminal examples of early abstractions from the 1940-1950s along with a selection of archive materials, including Hood’s personal correspondence, photos, and writings.

Each to the Other: Sharon Engelstein + Aaron Parazette

Love Me, Love Me Not