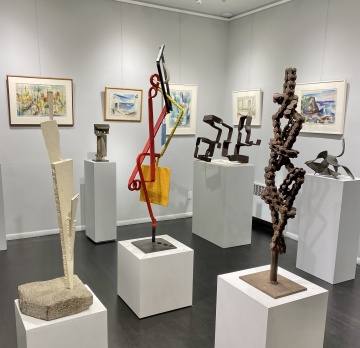 March 10, 2021 - April 9, 2021
Artist Benedict Tatti combined the originality of a self-taught artist with the sophistication of a vanguard artist and the technical know-how of a trained artisan. In truth, he was not strictly any one of these things, but a bit of all of them. He was adept in the wide range of media and methodologies of 20th century sculpture, even including video art. Tatti’s “day” jobs may have been what kept his vision fresh, as they were tangential to but not in the thick of the art world: from 1952 to 1963, he worked for the influential design firm of Raymond Loewy, developing and making models for real-life and prototypical objects: following that, he taught sculpture to city kids at the High School for Art and Design in New York City, for which his temperament seemed marvelously suited. He attended Hans Hofmann’s classes on Eighth Street in New York for two-and-a-half years. Here he could pick up on contemporary currents , while benefiting from Hofmann’s critiques of students works. The result was a freeing up of Ben’s concepts of space, as well as a gradual lean towards abstraction. He was an inveterate learner. He visited the Met and the Modern, the Museum of Natural History and the Central Park Zoo – all fodder for his sculpture. A walk in the city was always a treasure hunt , with demolition sites yielding troves of sculptural media - from building materials to everyday objects.