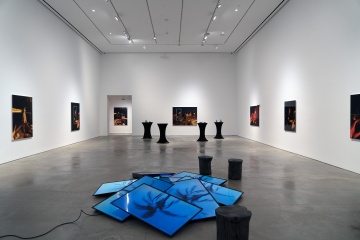 January 10, 2020 - February 22, 2020
303 Gallery is pleased to announce our second solo exhibition of new work by Kim Gordon. In a series of new works on canvas, Gordon presents a world of safety and familial intimacy surreptitiously undermined by insidious, unseen forces. Photographs of a group of revelers huddling around a beach bonfire are softened and overlaid with digital framing marks around the human figures, suggesting surveillance technology or facial recognition software. These images are emblematic of a new reality where no moment goes uncaptured, and where even the most ordinary events are packaged and sold, like an Airbnb listing promising a branded experience of intimacy. Gordon amplifies this phenomenon, referencing iconography from the world of music as it dovetails with youthful rebellion. The various crops and crosshairs allude to the logos of both Black Flag and Public Enemy, two groups emblematic of questioning authority and rising above structural oppression. Gordon's emphases seem to echo their animosity, drawing the very same lines as our tyrannical tech overlords, yet with the express purpose of reasserting control of our own dominions. Also on view will be "Los Angeles June 6, 2019," a film in which Gordon walks around Los Angeles with a guitar, utilizing handrails, plants, traffic implements, public sculpture and light poles as various accomplices in a performance that quite literally uses the city as a sounding board. Gordon assumes the role of interloper, unfazed by her happenstance audience while navigating the corporate territory of public spaces. Ironically, these scenes were surely also recorded by the various mechanisms of surveillance on the streets of LA, adding another layer of undisclosed viewership into the work's dissemination. We may know we are being watched, but it is up to us to transcend. Kim Gordon studied at the Otis Art Institute in Los Angeles in the late 1970s and has continued to work as an artist since. Her first solo exhibition presented under the name ‘Design Office’ took place at New York’s White Columns in 1981. Recent solo exhibitions include "She Bites Her Tender Mind," Irish Museum of Modern Art Dublin (2019); "Lo-Fi Glamour," The Andy Warhol Museum, Pittsburgh (2019); Reena Spaulings Fine Art, Los Angeles (2018); Manifesta 11, Zurich (2016); and "Noise Name Paintings And Sculptures Of Rock Bands That Are Broken Up," Deste Foundation, Athens (2015). A two-person show with Rodney Graham was presented at Dijon's L'Académie Conti in 2017. For the past thirty years Gordon has worked consistently across disciplines and across distinct cultural fields: art, design, writing, fashion (X-Girl), music (Sonic Youth, Free Kitten, Body/Head), and film/video (both as actress and director). Her first solo album "No Home Record" was released earlier this year on Matador Records.
Past Exhibitions

I Am With You